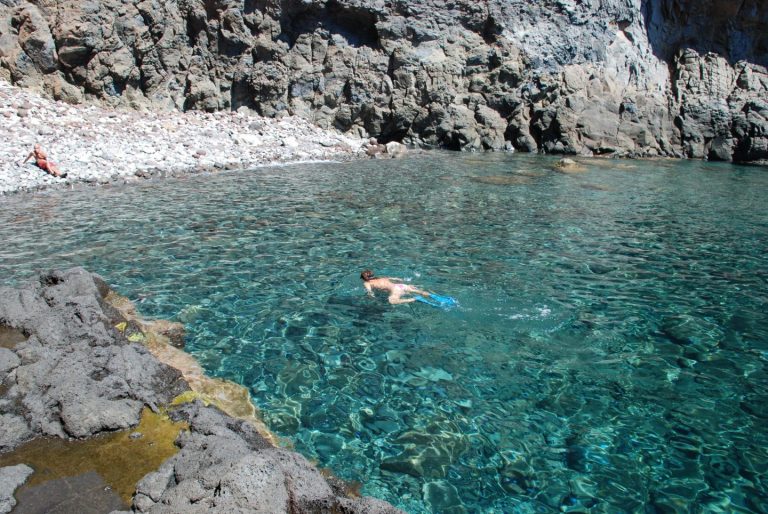 The west and east coasts of Capraia island are quite different from each other – the west coast is steep, jagged and eroded by strong sea storms, full of caves and ravines; while the east coast is more gentle and welcoming.

Here you will find unspoilt pieces of paradise – coves and inlets where you can truly relax, without the invasive mass tourism.

Cala Rossa, one of the most spectacular coves in the Mediterranean, is all that remains of a volcanic mouth over 4 million years old. It is located on the tip of Zenobito, the southern tip of the island, and is dominated by the tower of the same name. Its crystal-clear turquoise waters, reflected in the red rocks that drop sheer into the sea, make it a unique and evocative place, and a must-see during a boat trip around the island. The cove cannot be reached on foot.

The Cala di Porto Vecchio can be reached through a path that starts from the section of the old prison with the same name. It starts from the small church of The Assunta, by the port, and continues along the trail that climbs up through the former prison grounds. After about 40 minutes, you arrive at the Valle di Porto Vecchio farmhouse, and, after a short while, you will see the sign indicating the beginning of the path to Teglia. After another 100 metres, turn right towards Cala di Porto Vecchio. This footpath partly runs along an old well pipe just above the sea, among many myrtle plants. The beach is stony, and, after a few metres, the seabed becomes sandy. The waters are crystal clear and very suitable for snorkelling.

Cala dello Zurletto can be reached on foot from the Village, in about 20 minutes of quite a demanding walk. Dominated by a typical tower-shaped rock, it is an excellent cove for swimming. The water is crystal clear and suitable for snorkelling, with lots of fish. A short swim takes you to the smaller Zurlettino, an idyllic spot for diving enthusiasts. Zurletto, in the local dialect, is the name of the Asphodelus, which is very common in this area.

Carbicina is a cove on the east coast of the island. The cove has a cliff with flat volcanic stones, sandy and posidonia bottoms and a pebble beach. It can be reached on foot
via a coastal path, with a boat tour around the island, or even by taxi boat, for a full day at sea.

Below the convent of Sant’Antonio, just a few minutes from the Village, a short path leads to the pebbles and rocks of Cala San Francesco. Continuing towards the Lighthouse, you can reach some beautiful rocks, ideal for lying in the sun or, with mask and snorkel, swimming along the coast up to Punta del Fanale, or up to underneath the Castle. The seabed is exceptional.

Cala del Ceppo is located on the east coast of the island, just past Punta della Civitata. It can be reached by boat or on foot, via a fairly
demanding path that starts from the Village and, passing through the Piana
area, leads to the sea. The bottom of the cove is almost entirely sandy and the water is clear blue – perfect for snorkeling.
From the cove, you can easily spot raptors flying over the high cliffs; while the seabed is teeming with fish.

Cala della Mortola is located on the north-east
coast of the island and its name means “cove of myrtle”. Accessible only by sea, it is a charming cove of large pebbles and sand with a sloping, sandy seabed. It is the only real sandy beach on the island, which appears and disappears depending on the wind and the sea storms. The sea is crystal clear,
with wonderful green and blue shades, ideal for swimming or bathing -it is definitely a highlight during a boat tour of the island. Around the cove,
from the end of April, the Star Lily or
Illyrian Sea Lily blooms. It is a Sardinian-Corsican endemic species, and can only be found on a few islands in Tuscany, Corsica and Sardinia – it has a
beautiful white flower and belongs to the Amaryllis family. This beach is best enjoyed early in the morning or in the afternoon, just before sunset. Cala della Mortola is visible from the path leading to Punta della Teglia, or from the old prison road that leads to the section of the same name.

The Cala della Seccatoia, on the north-west coast of the island, can only be reached by boat. Its seabed is very varied and, in winter and spring, a small waterfall falls directly into the sea, from the steep coast of the cove. A few dozen metres to the north is the Seccatoia Grotto.

Cala del Reciso is located on the west coast of the island. There are two natural arches in the cove, the first, larger, was once “reciso” or divided in two by a rock that then collapsed, hence the probable origin of the name. If you look to the left of the arch you can see a crevice, a sort of long and narrow cave, from which you can see another cove, called “Seno della Peruccia”. The cove has two small pebble beaches: the first is immediately to the left of the larger Natural Arch, while the second – almost in the centre of the cove – is to the left of the second Natural Arch, called “Recisello”. The two pebble beaches can be reached by boat or by swimming; it is possible to swim under the Recisello Arch, and admire the sunset over the nearby Corsica.

Cala del Vetriolo is located on the west coast of the island, facing Corsica. The cove has spectacular lava flows and marine erosions, and, in the centre, next to the “elephant’s skin”, a cave with two entrances. On the right-hand side, the rocks are perforated by large ravines and are covered with yellow lichen. In spring, after a rainy day, you can admire the spectacle of a waterfall falling directly into the sea. Above, we can see the wild slope of Monte Rosso (224 m), where two groups of dwarf palms have been discovered. Accessible only by boat, the seabed is almost all sand; and it is possible to swim inside the cave.

After passing the southern tip of the island, just after Cala Rossa, we find the large Cala del Moreto. This is a large south-west facing cove with mostly sandy bottoms and a very varied coastline. It is a popular stop for sailing boats that stay overnight. The cove has two pebble beaches. The first is right in the centre, with a gully that leads to the Zenobito plain. The second is called Calanca del Sordo (or Pidocchio), and can only be reached by boat; it lies to the right of the cove, and it appears unexpectedly large when approached by swimming. Beautiful red or black volcanic stones can be found on the cove. 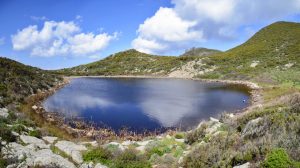 Stagnone, the only natural body of water in the Tuscan Archipelago