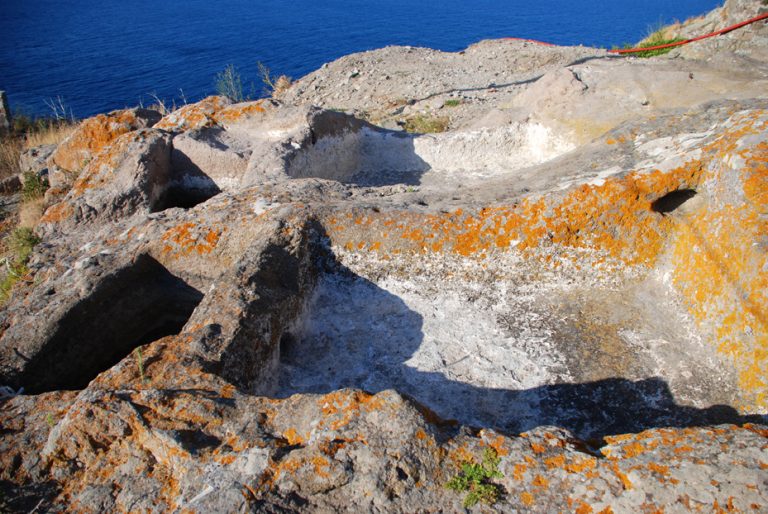 During a walk along the island’s paths, the traveler may be surprised by
the large quadrangular basins dug out of the rock, which can be found all over the island, especially in Le Tigghielle and on the rocky esplanade overlooking the Castle. These are ancient structures that were used for crushing grapes and making wine. The term “palmento” comes from the
Latin pavimentum (pavire: to beat, to pound), but they are also called “pigiatoi” or “
pestarole”. The earliest examples of  “palmenti”, cut into the rock, were found in Palestine and date back to the Bronze Age.

As for Capraia, at least some of the palmenti found near the Fortress (The
Palmenti of San Giorgio Fortress) date back to a period prior to the construction of the Fortress itself (1540), because they are partly covered by defensive structures that would have prevented their use.

As for other palmenti, it is plausible that they may have been built, or at least used, from the 16th century onwards, when documentary sources begin record a wine-growing practice in Capraia. Common ownership of the limited arable land, involved an annual division of fields between families, with barley being the main crop. On the other hand, families had permanent possession of the so-called piazzole – small strips of land, carefully cleared of the stones, that formed the protective walls, where vegetables and, above all, vines were grown. In the island’s peculiar agriculture, entrusted to women through the construction of the piazzole, the palmenti were important tools for making wine – a fundamental resource for the population, but also a rare means of exchange with the outside world.

The Palmenti delle Tigghielle can be seen on the road to La Piana, just before the
fork on the right. Following a short path through Mediterranean scrub (4 minutes), you
arrive at a flatter area,  where there are about ten.

A few minutes from the Village’s square, you can see the Palmenti del
Segalaio. From the Church of San Nicola, take the uphill road, and, after a few hundred metres, you will come to a fork on the left, with a sign indicating them. An unpaved path leads to the palmenti, devided in two groups,
on the left; the road ends shortly afterwards.