There is a territory, on the central coast of Tuscany, where water is the dominant element: they are the municipalities of Livorno, Capraia Island and Collesalvetti, called Tuscany’s Water Lands.

Visit Livorno with its canals and ancient Medici fortresses. Discover the oasis of Collesalvetti and the ancient aqueduct of Colognole. Venture along the coasts of Capraia island to discover the uncontaminated sea, or the many hiking trails. Come with us to discover the Water Lands of Tuscany. 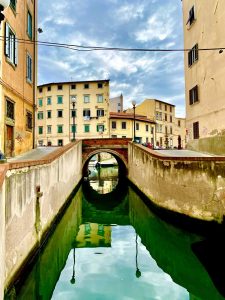 Overlooking the Tyrrhenian Sea, Livorno is a city of water by definition. Its characteristic canals, built by the Medici since 1577, criss-cross the historic center, making this city a truly suggestive setting.

Discover the city on foot or sail along its canals with a boat tour: from the Venezia District, to the picturesque S. Marco Pontino District, to the New and Old fortresses, the latter welcoming all those arriving from the sea. If you are in the mood of a touch of light and elegance, since 1925 the Terrazza Mascagni is a must-see. With its thirty-five thousand black and white tiles, it is an outdoor lounge between the city and the sea. Livorno is also a city of museums, with the Fattori Museum, which collects the works of the Macchiaioli, the City Museum, which recounts the past, present and future of the city, or the Museum of Natural History of the Mediterranean, an evocativ itinerary accessible to all which reconstructs the evolution of the human species.

You cannot experience Livorno without tasting its cuisine: from Cacciucco, to 5&5, accompanied by Ponce, all to be enjoyed in the bars and restaurants of the city center, where you can breathe in the air of a city still on a human scale.

Fascinating and uncontaminated, the Island of Capraia, off Livorno’s coast, is the most illustrious representative of Tuscany’s Water Lands. Its isolation makes it an ideal destination for those who want to regenerate,  away from the frenzy of everyday life. 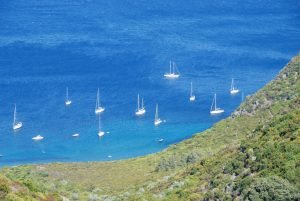 The sea, part of the marine protected area of the Tuscan archipelago, is waiting for you to be explored by boat or inflatable boat, on your own or on an organized tour. Sailing along the coast

you will enjoy glimpses of extraordinary beauty: rocks, coves, inlets, small caves, evidence of the geo-volcanic evolution of the island. Don’t miss a dive to discover the seabed where a varied fauna of groupers, barracudas, amberjacks and many other fish awaits you — an

incredible scenery that has nothing to envy to the Caribbean seas.

If you love hiking, Capraia is perfect with its many paths, bordered by ancient “Palmenti” surrounded by nature: reach Monte Le Penne or Punta del Dattero and enjoy breathtaking views, from the Tuscan coast to the island of Gorgona, and breathe in the regenerating, iodine-rich air.

No trip to Tuscany’s Water Lands would be complete without a visit to Collesalvetti, whose territory is part of the Monti Livornesi Park (a regional nature reserve). A true green lung extending for 1300 hectares, dotted with numerous small villages where traces of a rural past still persist. 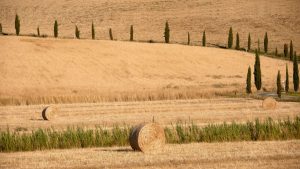 Have fun exploring the ancient Leopoldino aqueduct, designed in the nineteenth century to supply Livorno with water: studded with arches, sometimes dizzying, the monumental structure connects Colognole to Livorno along an 18 km route that can be covered on foot. Also not to be missed is a visit to the Oasi della Contessa, a regional nature reserve and the last vestige of a coastal swamp. Perfect for birdwatchers, here you can observe herons and sea jays or admire the characteristic vegetation of this extraordinary natural habitat.

Tuscany’s Water Lands are waiting for you to live a unique and authentic experience, in the name of sustainable tourism, among nature, art, sport and good food!