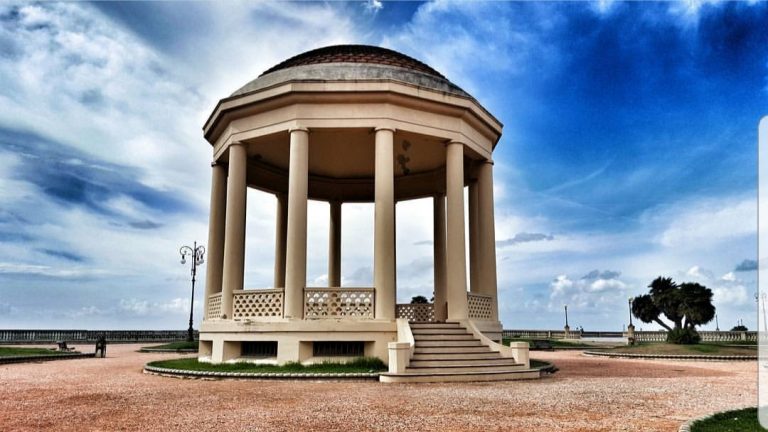 The beautiful Terrazza Mascagni is the ideal place to end a pleasant walk
on the Livorno‘s seafront. This wonderful square overlooking the sea, with its very distinctive black and white chequered floor, is in fact one of the
most evocative places in the city: from here you can enjoy  breathtaking views,
admire the various shades of blue, from the sea to the sky, or marvel at the beautiful sunsets. It was built between 1927 and 1951, on an area called Spianata dei Cavalleggeri, and used as a large old amusement park. There is a classic gazebo for musical performances in the centre, which was destroyed by bombing in World War II and then rebuilt according to the original. After the end of the war, the square was named after Leghorn composer Pietro Mascagni, who composed, among other operas, the famous Cavalleria rusticana, Iris and L’amico Fritz.

The architecture of the Terrace is very unusual: the floor is a geometric checkerboard of 8,700 square metres, made up of over 34,000 black and white tiles, while a balustrade, made up of 4,000 small columns, separates the square from the sea.

Facing the terrace, is the sumptuous and panoramic Grand Hotel Palazzo, in neo-Renaissance style, which, in the early years of the last century, was considered one of the most beautiful hotels in the world.

Towards the south, there are historic beach resorts, bars, palaces and the imposing Naval Academy – and then, the “Rotonda” pine forest, a small green oasis of trees bent by the force of the sea winds.